2019 Ford Ranger Raptor Australia BEHIND that bold front end and under the bulging rear quarter panels, Ford has seriously beefed up the chassis and suspension of its T6-based Ranger Raptor. From the reinforced chassis rails to the bespoke Fox Racing shock absorbers and coil-over suspended multi-link rear end, this beast is made to take on the toughest tracks at speed. We take a look under the metal and composite body work for a closer look and speak to Jamal Hameedi, Global Performance Vehicle Chief Engineer, Ford Motor Company, about what makes it so special.

As we’ve reported, the first Ford Ranger Raptor is powered exclusively by a 2.0-litre four-cylinder bi-turbo diesel outputs 157kW and 500Nm – 10kW and 30Nm more than the Ranger’s 3.2-litre five-cylinder turbo-diesel. In this case the downsized twin-turbo oiler is paired for the first time in the Ranger with Ford’s new 10-speed automatic transmission (rather than a six-speed manual or auto, as in the Wildtrak). We’ve also detailed the Ranger Raptor’s many chassis upgrades, including its redesigned Watts-link coil-spring rear suspension, Fox Racing Shox dampers, 150mm-wider wheel tracks, 283mm of ground clearance, 4.5-tonne recovery hooks, 2.3mm-thick bash plates, and 332mm disc brakes and 285/70-section 17-inch BF Goodrich A/T tyres all round.

What customers will really be paying for with the ranger Raptor is the suspension. It has a frame specially prepared for the rigours of off-road driving, along with a coilover rear suspension with a Watt’s link and a solid rear axle. There’s also ‘Position Sensitive Damping’ Fox Racing shock absorbers up front and out back, which are mounted using forged aluminium upper arms and cast aluminium lower arms. The braking system is also rather robust, consisting of twin-piston front callipers and 13-inch ventilated front and rear rotors. As for tires, the Ranger Raptor will come with all-terrain BF Goodrich rubber that Ford says is appropriate for use both on and off paved roads.

Pricing for the 2019 Ford Ranger Raptor has yet to be announced. It will be sold in Australia and other Asia-Pacific markets beginning later this year.

Pricing for the hotly anticipated Ford Ranger Raptor has been revealed in Thailand – the first market to receive Ford’s hottest ever Ranger – providing the first indication of what it might cost in Australia. Due on sale here late this year as the headline act of the heavily upgraded 2019 Ford Ranger line-up, the Ford Ranger Raptor will cost 1.699 million Thai bhat (TBH) in Thailand, where it will be produced for Australia. While that converts to $A70,729, it’s precisely TBH 500,000 more than the hitherto top-shelf Ranger Wildtrak 3.2 4×4 dual-cab auto, which currently tops Ford Australia’s Ranger line-up at $59,590 plus on-road costs.

Based on the Thai-market price premium of 41.7 per cent over the Wildtrak 3.2 (TBH 1,199,000), the Ford Ranger Raptor would therefore cost $84,440 plus ORCs in Australia. Our bet is $84,590 plus ORCs, making it a neat $25K more than the Wildtrak, which along with $50,000-plus XLT models comprises about two-thirds of all Ranger sales Down Under, where the Ranger is the second most popular new vehicle – bar none – behind Toyota’s HiLux. 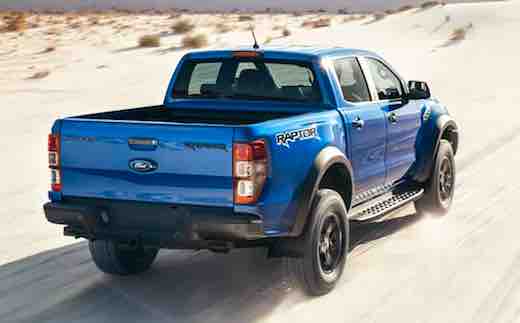 That’s consistent with the circa-$85,000 pricetag that our sources are telling us – or around the same price as the upcoming Mercedes-Benz X 350d, with which it will vie to be Australia’s most expensive mid-size ute. Official pricing for the Ford Ranger Raptor has been announced for the Australian market. It will be tagged at $74,990, which represents a 22 per cent premium over the current most expensive Ford Ranger Wildtrak ($61,115).